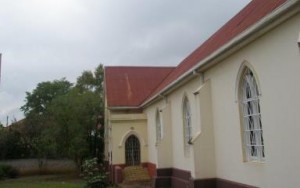 The Allard House Chapel (known to many as St Mary’s Chapel – pictured below) and named after the first Bishop, John Francis Allard, was the first Catholic Church built in 1852 in KZN by the French missionary order of the Oblates of Mary Immaculate from Aix-en-Provence in France. For the 150th anniversary of the arrival of the Oblates, the chapel was restored and already for that occasion in 2002, through the appeal of the “French” project, the Napoléon Foundation in Paris donated R34 000.00. This sum matched the R34 000.00 that the “French” project had obtained from the, then, Ndlovu Regional Council.

This second donation by the Napoleon Foundation is in much need. For a closer look at the chapel, join us at the annual memorial mass for the Prince Impérial at 9:30 on Saturday 30 May 2015. The Prince had attended mass in the chapel in April 1879 on his way up to Zululand to join the Second Division during the Anglo-Zulu War. He met his untimely fate on 1 June 1879 at Uqweqwe and his mortal remains lay in state in the chapel on the night of 8 June 1879 before they were repatriated via Dundee, PMB, Durban, Cape Town, St Helena to England where the imperial family had lived in exile. The Prince now lies in the crypt of St Michael’s Abbey, Farnborough, with his father, Napoléon III and his mother, the Empress Eugénie.

Unfortunately, the generous donation of the Napoleon Foundation is not enough to cover the full quote for all the repairs needed. The total quote provided is R323 400, so a further R268 704 is needed to complete the necessaries.

INVITATION: JOIE DE VIVRE with the Alliance Française, PMB
10H00 to 14HOO+/- Sunday 22 May 2022
Le Petit Café of La Petite France
A matinée of Francophone/ Francophile bonhomie ambiance!
Dust off those bérets, put a rumba in your step, hum along with Emma and Ilse, tap to the Chistlehurst CANCAN, wave your tricolore! Nibble on La Petite France French-style cheeses!
SHAKE OFF THOSE POST-PANDEMIC+ BLUES!
SUPPORT OUR LOCALS!
JOIN US, s’il vous plaît!